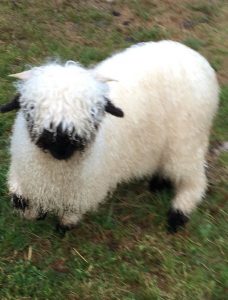 Although the earliest mention of these sheep dates back to the 1400’s this large framed docile mountain sheep was first recognised as a separate breed in 1962. It has adapted well to life in the high mountains and grazes even on the steepest, stoniest slopes. The black patches on its nose, eyes, ears, knees, hocks and feet and otherwise light woolly coats make it quite unmistakeable.  They are mostly found in the mountains of Switzerland, there are a couple of breeders in Germany.

Valais Blacknose sheep are known to be good for their meat as they are large animals, they are also well known for their wool, which is best used for felting and for carpets.

Thanks to the following for their help in setting up this year’s event:

We use cookies to ensure that we give you the best experience on our website. If you continue to use this site we will assume that you are happy with it.Ok